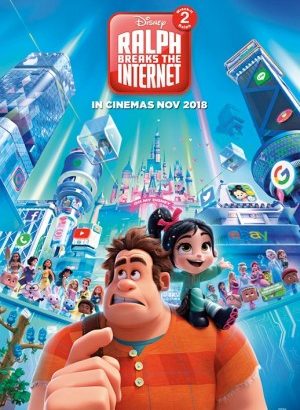 Ralph Breaks the Internet is a 2018 American 3D computer-animated comedy film produced by Walt Disney Animation Studios and distributed by Walt Disney Pictures as well as the studio’s 57th feature-length film. It is the second installment of the Wreck-It Ralph film series and the sequel to the 2012 film Wreck-It Ralph. It is directed by Rich Moore and Phil Johnston, written by Johnston and Pamela Ribon, and executive-produced by John Lasseter, Chris Williams, and Jennifer Lee.[a] It features John C. Reilly, Sarah Silverman, Jack McBrayer, Jane Lynch, and Ed O’Neill reprising their roles from the first film, with Alan Tudyk returning to voice a new character, alongside new additions to the cast including as Gal Gadot, Taraji P. Henson, and Alfred Molina. The film is dedicated to Marvel co-creator Stan Lee, who died before the film’s release and has a cameo in the film.[citation needed]

Talks for a Wreck-It Ralph sequel began in October 2012, and went through three different scripts before settling on the final plot. The film was officially announced in June 2016, with much of the original cast confirming they had signed on, with new members being added in 2018. It marks the first feature-length theatrical sequel from Walt Disney Animation Studios since Fantasia 2000, which was a sequel to the 1940 animated film Fantasia. It is also the studio’s first animated sequel to be created by the original film’s writing/directing team.

Ralph Breaks the Internet had its world premiere at the El Capitan Theatre in Los Angeles on November 5, 2018, and was released in the United States on November 21, 2018. The film received positive reviews from critics, who called it a “worthy successor” and praised the animation, humor, characters, storyline, as well as the vocal performaces of Reilly and Silverman.