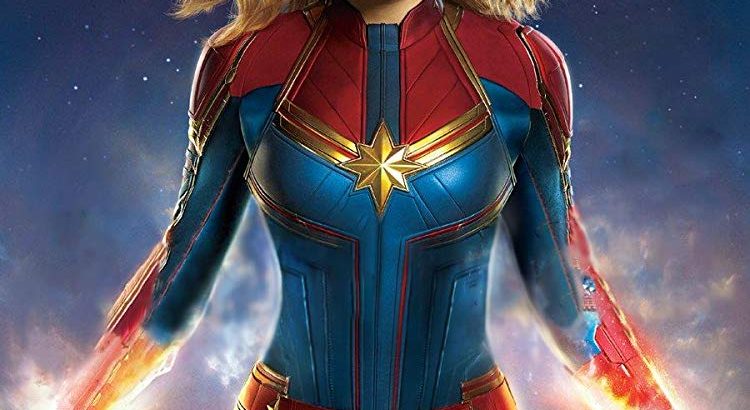 Captain Marvel is a 2019 American superhero film based on the Marvel Comics character Carol Danvers. Produced by Marvel Studios and distributed by Walt Disney Studios Motion Pictures, it is the twenty-first film in the Marvel Cinematic Universe (MCU). The film is written and directed by Anna Boden and Ryan Fleck, with Geneva Robertson-Dworet also contributing to the screenplay. Brie Larson stars as Danvers, alongside Samuel L. Jackson, Ben Mendelsohn, Djimon Hounsou, Lee Pace, Lashana Lynch, Gemma Chan, Annette Bening, Clark Gregg, and Jude Law. Set in 1995, the story follows Danvers as she becomes Captain Marvel after Earth is caught in the center of a galactic conflict between two alien worlds.

Development of the film began as early as May 2013, and was officially announced in October 2014, making it Marvel Studios’ first female-led superhero film. Nicole Perlman and Meg LeFauve were hired as a writing team the following April after submitting separate takes on the character. The story borrows elements from Roy Thomas’s 1971 “Kree–Skrull War” comic book storyline. Larson was announced as Danvers at the 2016 San Diego Comic-Con, with Boden and Fleck brought on board to direct in April 2017. Robertson-Dworet soon took over scripting duties, with the remainder of the cast added by the start of filming. Location shooting began in January 2018, with principal photography beginning that March in California before concluding in July 2018 in Louisiana. Jackson and Gregg—who, among others, reprise their roles from previous MCU films—were digitally de-aged in post-production to reflect the film’s 1990s setting.

Captain Marvel had its world premiere in London on February 27, 2019, and was theatrically released in the United States on March 8, 2019, in IMAX and 3D. The film has grossed over $550 million worldwide, making it the second highest-grossing film of 2019. Critics described it as “entertaining, enjoyable and savvy” and praised the performances of Larson, Jackson and Mendelsohn.

In 1995, on the Kree Empire’s capital planet of Hala, Starforce member Vers suffers from recurring nightmares involving an older woman. Yon-Rogg, her mentor and commander, trains her to control her abilities while the Supreme Intelligence, an artificial intelligence and the ruler of the Kree, urges her to keep her emotions in check.

During a mission to rescue an undercover operative infiltrating a group of Skrulls, alien shapeshifters with whom the Kree are at war, Vers is captured by Skrull commander Talos, taken aboard their Earth-bound vessel, and subjected to a memory probe. Vers manages to escape, crashlanding in Los Angeles. Her presence attracts S.H.I.E.L.D. agents Nick Fury and Phil Coulson, whose investigation is interrupted by a Skrull attack. In the ensuing chase, Vers recovers a crystal containing her extracted memories while Fury kills a Skrull impersonating Coulson. Talos, disguised as S.H.I.E.L.D. Director Keller, orders Fury to work with Vers on the condition he does it alone in the event of other Skrull imposters.

Fury takes Vers to a U.S. Air Force base and discovers she was a pilot presumed to have died in 1989 while testing an experimental engine designed by a Dr. Wendy Lawson, whom Vers recognizes as the woman from her nightmares. A S.H.I.E.L.D. team led by Talos tries to capture them, but they escape in a cargo jet, with Lawson’s cat Goose and fly to Louisiana to meet former pilot Maria Rambeau, the last person to see Vers and Lawson alive.

Talos arrives at the Rambeau house just as Vers discovers her real name is Carol Danvers. He reveals the Skrulls are refugees searching for a new home and Lawson was a renegade Kree scientist helping them. He then plays the recovered black box from Lawson’s plane, prompting Danvers to remember the day of the crash: Lawson died at Yon-Rogg’s hands while attempting to destroy the engine’s energy-core, forcing Danvers to do so at the cost of absorbing the energy from the ensuing explosion and losing her memories.

After convincing Danvers to help him, Talos leads her, Fury and Rambeau to a cloaked space cruiser orbiting Earth, where several Skrulls, including his family, are protecting the Tesseract, the source of the energy-core. Starforce captures Danvers and brings her before the Supreme Intelligence. During their conversation, Danvers removes a Kree implant that was suppressing her powers, allowing her to access all her abilities. During the subsequent battle, Fury retrieves the Tesseract and Goose, who is revealed to be an alien with a pocket dimension inside her body, swallows it before scratching Fury’s left eye and permanently blinding him. Danvers destroys ballistic missiles fired by Kree official Ronan the Accuser, forcing him and his forces to retreat, before overpowering Yon-Rogg on Earth and sending him back to Hala with a warning to the Supreme Intelligence.

Danvers departs to help the Skrulls find a new homeworld, giving Fury a modified pager to contact her in an emergency. Meanwhile, Fury drafts an initiative aimed at locating heroes like her and changes the name after finding a photo of Danvers in her Air Force jet, which bears the call sign “Avenger”.

In a mid-credits scene set in the present day, Steve Rogers, Natasha Romanoff, Bruce Banner, and James Rhodes are monitoring the pager, which Fury activated prior to his disintegration, when Danvers appears and asks Fury’s whereabouts. In a post-credits scene set in 1995, Goose climbs onto Fury’s desk and regurgitates the Tesseract.