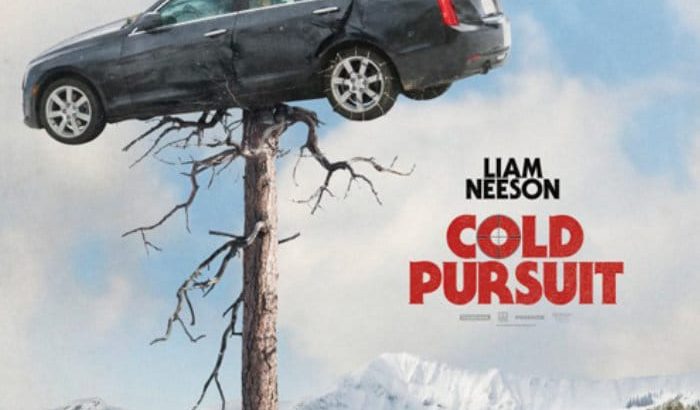 Cold Pursuit is a 2019 American black comedy action film directed by Hans Petter Moland (in his Hollywood debut) from a screenplay by Frank Baldwin. The film stars Liam Neeson, Laura Dern, Emmy Rossum, William Forsythe, and Tom Bateman. It is a remake of the 2014 Norwegian vigilante film In Order of Disappearance (Kraftidioten), also directed by Moland, and follows a snowplow driver who sets out for revenge on a local drug lord following the murder of his son.

The film was released in the United States on February 8, 2019, by Summit Entertainment. It has grossed over $44 million worldwide and received generally positive reviews from critics, who praised the action sequences and the dark humor.

Nelson “Nels” Coxman’s quiet life as a snowplow driver in the glitzy Colorado ski resort of Kehoe, where he was just awarded “Citizen of the Year”, is disrupted when his son dies from a forced heroin overdose. Nels’ wife Grace has a psychotic breakdown over her son’s death and leaves her husband in grief.

A depressed Coxman is about to commit suicide when he learns that his son was murdered by a drug cartel. This causes him to craft a custom sniper rifle, become a vigilante and kill three members of the cartel, sinking their bodies in a nearby river. He gets additional insight into the criminal network from his brother, Brock “Wingman” Coxman, who was once an enforcer for the local cartel. The cartel’s leader, Trevor “Viking” Calcote, suspects that these deaths are the work of Native American drug lord White Bull, with whom he has earlier avoided conflict. Viking abducts and murders White Bull’s only son, which sparks a gang war between the two factions. When Viking contacts Brock about the recent hits, Brock takes responsibility to protect his brother, as he is dying of cancer anyway.

Viking eventually learns that Coxman has killed his men, and tries in vain to call off the gang war by claiming that one of his men killed White Bull’s son on his own initiative, not realizing White Bull intends to exact revenge through a blood debt, “a son for a son”. Meanwhile, Coxman kidnaps Viking’s son from his prep school in an attempt to draw the drug lord into an ambush. Despite abducting the boy, Coxman treats him well and avoids putting his life in jeopardy.

Viking’s gang arrive at Coxman’s ambush, which is unsuccessful, and he is captured alive. White Bull’s gang arrives shortly thereafter with the intention of vengeance. During the ensuing shootout, most of the gangsters are killed and Viking is trapped after Coxman drops a shorn tree on his car, and is shot in the chest by White Bull.

Viking dies later when found by Kehoe police Detectives Kimberly Dash and her partner Gip. As Coxman leaves the property in his snowplow to continue his work, White Bull jumps into the cab and the two men drive away together. The last remaining enforcer for White Bull’s cartel accidentally paraglides into the snowplow- having set off on a glide from the hotel where White Bull’s men were staying the night before- and is chopped to bits.

← The Kid Who Would Be King
Alita →