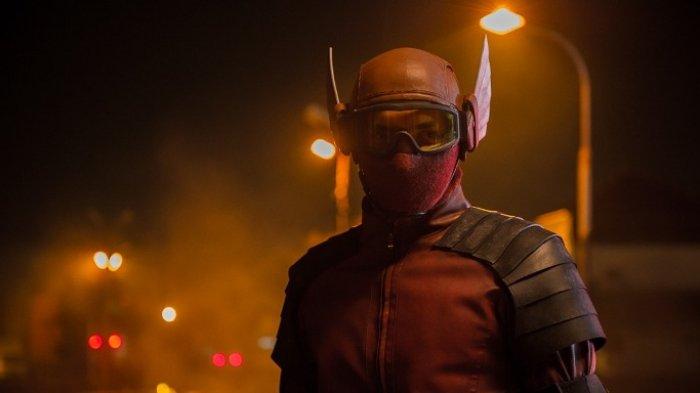 Gundala is an upcoming Indonesian superhero film based on the comics character Gundala created by Harya “Hasmi” Suraminata in 1969, co-produced by Screenplay Films and Bumilangit Studios, and distributed by Legacy Pictures. It is the first installment in the Bumilangit Cinematic Universe (BCU). The film is directed and written by Joko Anwar, and stars Abimana Aryasatya as Sancaka / Gundala, alongside Tara Basro, Bront Palarae, Ario Bayu, Cecep Arif Rahman, Rio Dewanto, and Muzakki Ramdhan. The first official news about the film was announced on April 4, 2018 on social media accounts of its director and production houses. At Indonesia Comic Con on October 28, 2018, a press conference was held to introduce the main casts and the first look video of the film with a release date set around mid 2019. Filming has been done in September throughout October 2018. Gundala will have its local premiere on August 28, 2019, and is scheduled to be released in Indonesia on August 29, 2019.

In 1981, the popularity of the Gundala comics in Indonesia reached the big screen. By purchasing a license from the author, PT. Cancer Mas Film visualizes the comic to a film titled Gundala Putra Petir (“Gundala the Son of Lightning”), directed by Lilik Sudjio. The actor who was appointed as Ir. Sancaka or Gundala is Teddy Purba who was famous as one of the Indonesian action stars at that time. His mortal enemy, Ghazul was played by the character actor W. D. Mochtar, while Sancaka’s lovers, Minarti played by Anna Tairas. Other actors and actresses involved in the film include Ami Priyono, August Melasz, Pitrajaya Burnama, H.I.M. Damsyik, Gordon Subandono, A. Hamid Arief, Rini Ratih, Dewanti, and Ratno Timoer. Even though the setting was changed from the setting on the comics, the film remained faithful to storytelling based on comics written by Hasmi. It was told that an engineer named Sancaka managed to find the anti-lightning formula. Unfortunately this discovery resulted in Sancaka having to break up with her lover Minarti due to forgetting to attend her birthday. In the midst of sadness and heavy rain, Sancaka was struck by lightning and carried over to the world of Emperor Kronz. There, he was given the power and costume that turned him into Gundala. Meanwhile, the circulation of narcotics by a group of organizations led by Ghazul began to run rampant. That is when the battle between good against evil began.

In 2010, there was a hoax perpetrated by Iskandar Salim, a photographer and graphic designer who created promotional material for a movie that was not being made about Gundala. Salim noticed that there had never been a movie featuring an Indonesian superhero and wished to start a public debate on the subject. He created an official website, a Facebook page, posters, and staged photographs that allegedly showed the movie being made. As a result of the attention generated by the hoax, Gundala’s creator, Hasmi became involved in negotiations to produce a real film based on the character.