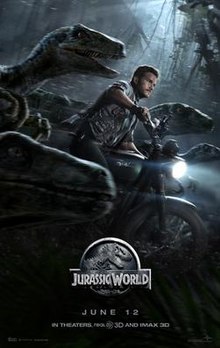 Set 22 years after the events of Jurassic Park, Jurassic World takes place on the same fictional Central American island of Isla Nublar, which is located off the Pacific coast of Costa Rica, where a theme park of cloned dinosaurs has operated for nearly a decade. The park plunges into chaos when a genetically-engineered dinosaur escapes from its enclosure and goes on a rampage.

Universal Pictures intended to begin production of a fourth Jurassic Park film in 2004 for a mid-2005 release but development stalled while the script underwent several revisions. Following a suggestion from Spielberg, writers Rick Jaffa and Amanda Silver explored the idea of a functional dinosaur park. Once Trevorrow was hired as director in 2013, he followed the same idea while developing a new script with Derek Connolly. Filming lasted from April to August 2014 in Louisiana and at the original Jurassic Park locations in Hawaii. The dinosaurs were created by Industrial Light & Magic using CGI and by Legacy Effects using life-sized animatronics.