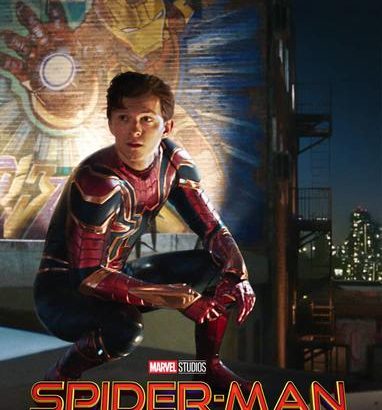 Spider-Man: Far From Home is a 2019 American superhero film based on the Marvel Comics character Spider-Man, co-produced by Columbia Pictures and Marvel Studios, and distributed by Sony Pictures Releasing. It is the sequel to Spider-Man: Homecoming (2017) and the twenty-third film in the Marvel Cinematic Universe (MCU). The film is directed by Jon Watts, written by Chris McKenna and Erik Sommers, and stars Tom Holland as Peter Parker / Spider-Man, alongside Samuel L. Jackson, Zendaya, Cobie Smulders, Jon Favreau, J. B. Smoove, Jacob Batalon, Martin Starr, Marisa Tomei, and Jake Gyllenhaal. In Spider-Man: Far From Home, Parker is recruited by Nick Fury and Mysterio to face elemental threats from another dimension while he is on a school trip to Europe.

By October 2016, discussions had begun for a sequel to Spider-Man: Homecoming, with a release date given to the film before the end of the year. Holland was confirmed to return in July 2017, with Watts and the writers also confirmed to return by the end of that year. In 2018, Jackson and Gyllenhaal joined the cast as Fury and Mysterio, respectively. Holland revealed the sequel’s title ahead of filming, which began in July 2018 and took place in England, the Czech Republic, Italy, and the New York metropolitan area. Production wrapped in October 2018. The film’s marketing campaign attempted to avoid revealing spoilers for Avengers: Endgame prior to its April 2019 release.

Spider-Man: Far From Home premiered in Hollywood on June 26, 2019, and was theatrically released in the United States on July 2, 2019, in 3D and IMAX. The film has grossed $342 million worldwide and was positively reviewed, with critics calling it a “fun and satisfying sequel” and praising the performances of the cast, particularly Holland and Gyllenhaal.

In Ixtenco, Nick Fury and Maria Hill investigate an unnatural storm and later encounter the Earth Elemental. A super-powered man, Quentin Beck, arrives to fight the creature. Eight months later, in New York City, the Midtown School of Science and Technology restarts its academic year to accommodate the students who were among those resurrected in the Blip.[N 1] The school organizes a two-week summer field trip to Europe, where Peter Parker, still distraught over Tony Stark’s death,[N 1] plans to confess his growing feelings for classmate MJ and avoid heroics. At a fundraiser for the homeless coordinated by his Aunt May, Parker is forewarned by Happy Hogan that he will be contacted by Nick Fury, but Parker chooses to ignore the call. Parker leaves after being overwhelmed by questions about Stark.

In Venice, during the trip, Parker and his friends are among those attacked by the Water Elemental, which proceeds to wreak havoc on the city. Beck arrives and destroys the creature, while Parker attempts to help. Fury meets with Parker and gives him Stark’s glasses, which were meant for his successor. The glasses are equipped with the artificial intelligence E.D.I.T.H., which has access to all databases of Stark Industries and commands a large orbital weapons supply. Beck claims the Elementals killed his family and that he hails from a different reality, one among many in the Multiverse. Parker rejects Fury’s call to arms, opting to rejoin his class, but Fury covertly redirects the school trip’s itinerary to Prague, where the Fire Elemental is projected to strike. It appears at a carnival, but Beck, with Parker’s help, destroys it. Fury and Hill invite Parker and Beck to Berlin to discuss the formation of a new superhero team. Parker considers Beck worthy of being Stark’s successor and bequeaths him the E.D.I.T.H. glasses. Unbeknownst to him, Beck is revealed to be a former holographic-illusions specialist at Stark Industries who was fired for his unstable nature, now leading a team of disgruntled ex-Stark employees and using advanced projector drones created by William Ginter Riva to simulate the Elemental attacks.

MJ deduces Parker is Spider-Man. They discover that a piece of debris she retrieved during the carnival battle is a projector that presents a simulation of the Air Elemental, leading the two to realize Beck is a fraud. When preparing for another illusion, Beck discovers MJ took evidence of his deception. Parker travels to Berlin and meets with Fury, only to realize that the version before him is an illusion created by Beck. He battles multiple illusions before Nick Fury apparently subdues Beck. Fury forces Parker to reveal anyone who has knowledge of the deception before being revealed as another illusion; ultimately hit by a train, Parker survives, albeit badly injured, and falls unconscious in a train car. Awakening in a jail cell in the Netherlands, he breaks out and contacts Hogan. Hogan flies Parker to London and reveals a suit-manufacturing machine left behind by Stark, which Parker uses to synthesize a customized costume. In London, Beck orchestrates an Elemental Fusion, seeking to kill MJ and any others to whom she might have revealed his secret. Parker breaks through the illusion, regains control of E.D.I.T.H., and defeats Beck, who dies by a misfired drone gunshot. Riva escapes with the drone files and recordings, while Parker returns to New York City and begins a relationship with MJ.

In a mid-credits scene, reporter J. Jonah Jameson of TheDailyBugle.net blames Spider-Man for the Elementals’ attacks, broadcasting doctored footage of the incident filmed and recorded by Beck in which he incriminates Parker for his death and reveals his secret identity. In a post-credits scene, the Skrulls Talos and Soren are revealed to have been masquerading as Fury and Hill the whole time, as directed by the real Fury, who commands a Skrull spaceship.