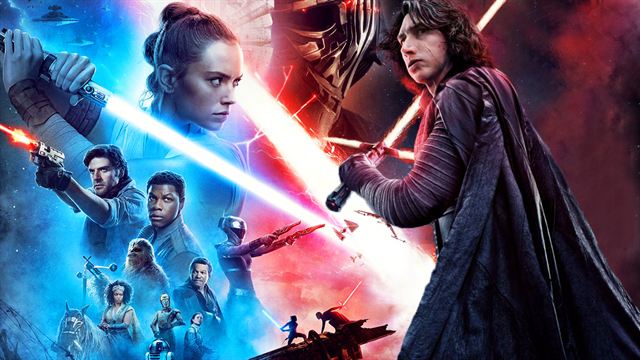 Star Wars: The Rise of Skywalker

The Rise of Skywalker follows Rey, Finn, and Poe Dameron as they lead the Resistance’s final stand against Kylo Ren and the First Order, who are now aided by the return of the deceased galactic emperor, Palpatine. After the new trilogy was announced following Disney’s acquisition of Lucasfilm in 2012, it was originally reported that The Last Jedi director Rian Johnson would write the script for Episode IX. In August 2015, Colin Trevorrow was hired to direct and to write a script with his collaborator Derek Connolly; both ultimately retained story credit with Abrams and Chris Terrio. In September 2017, Trevorrow left the project following creative differences with producer Kathleen Kennedy, and Abrams returned as director. Principal photography began in August 2018 at Pinewood Studios in England, and wrapped in February 2019; post-production was completed on November 24, 2019.

The Rise of Skywalker had its world premiere in Los Angeles on December 16, 2019, and was theatrically released in the United States on December 20, 2019. It received mixed reviews, with critics praising the cast performances and visual effects, but criticizing the plot and pacing. Reception was divided over the perceived departure from the themes and plot of The Last Jedi.

Following a mysterious galaxy-wide broadcast by the late Emperor Palpatine, Kylo Ren obtains a Sith wayfinder device[b] leading him to the broadcast’s source on the planet Exegol. There, he finds a physically impaired Palpatine, who reveals that he created Snoke as a puppet to control the First Order and lure Kylo to the dark side. Palpatine unveils a secret armada of Star Destroyers and tells Kylo to find and kill Rey, who is continuing her Jedi training under General Leia Organa. Meanwhile, Finn, Poe Dameron, and Chewbacca receive information from a First Order spy confirming Palpatine’s return. Rey discovers notes in Luke Skywalker’s Jedi texts about a Sith wayfinder that will lead them to Palpatine. Rey, Poe, Finn, Chewbacca, BB-8, and C-3PO depart to the planet Pasaana to seek the wayfinder, while R2-D2 stays with Leia.

On Pasaana, the group encounters Lando Calrissian, who points them to the wayfinder’s last suspected location. Kylo learns where Rey is through their Force bond and travels there with the Knights of Ren. Rey and the others discover the remains of the assassin Ochi, his ship, droid, and dagger inscribed with Sith text, which C-3PO’s programming forbids him from interpreting. Sensing that Kylo is nearby, Rey goes to confront him. The First Order captures the Millennium Falcon, Chewbacca, and the dagger; Rey, attempting to save Chewbacca, accidentally destroys a First Order transport with Force lightning. The group escapes on Ochi’s ship, presuming that Chewbacca was killed in the explosion.

Poe suggests traveling to Kijimi to have the Sith text extracted from C-3PO’s memory. The process wipes C-3PO’s memory, but reveals coordinates to a wayfinder on Kef Bir.[10] Rey senses that Chewbacca is alive, and the group mounts a rescue mission. While Kylo searches for Rey, the group infiltrates his Star Destroyer with the help of Zorii Bliss, an old acquaintance of Poe’s. Rey recovers the dagger and has visions of her parents being killed with it. Kylo informs her that she is Palpatine’s granddaughter; the Sith lord had ordered Ochi to recover Rey as a child, but her parents hid her on Jakku to protect her. General Hux saves Poe, Finn and Chewbacca from execution, revealing himself as the spy. He lets the group escape on the Falcon, but is executed for treason.

The group arrives on Kef Bir. Jannah, an ex-stormtrooper and Resistance sympathizer, leads them to the remains of the second Death Star, where Rey locates the wayfinder. Kylo, having tracked the group to Kef Bir, destroys Rey’s wayfinder and asks her to help him supplant Palpatine. Rey and Kylo duel, while the rest of the group returns to the Resistance base. Leia, dying, calls to Kylo through the Force, distracting him, and Rey impales him. Sensing Leia’s death, Rey heals Kylo and takes Kylo’s ship to exile herself on Ahch-To. As a Force spirit, Luke encourages Rey to face Palpatine, giving her Leia’s lightsaber and his X-wing. Rey leaves for Exegol, using the wayfinder on Kylo’s ship. Kylo converses with a memory of his father, Han Solo; he throws away his lightsaber and reclaims his identity as Ben Solo. Palpatine has a Star Destroyer obliterate Kijimi as a show of force.

At the Resistance base, R2-D2 restores C-3PO’s memory. The Resistance follow Rey’s coordinates to Exegol, where she confronts Palpatine; he demands she kill him to transfer his spirit into her. Lando brings reinforcements from across the galaxy to join the battle. Ben arrives to help Rey, overpowering the Knights of Ren. Recognizing Rey and Ben as a rare Force dyad, Palpatine drains their power, rejuvenating himself, and incapacitates Ben. He attacks the entire Resistance fleet with Force lightning. Rey, weakened, hears the voices of past Jedi, who lend her their strength. Palpatine attacks her with his lightning, but Rey deflects it using the Skywalker lightsabers, killing him and herself. Ben revives Rey by transferring his life force into her; the two share a kiss. Ben becomes one with the Force, as does his mother. The Resistance destroys the remainder of Palpatine’s armada.

As the Resistance celebrates, Rey visits the Lars homestead on Tatooine. She buries the Skywalker lightsabers, having built her own. A local asks her name; after seeing the spirits of Luke and Leia, she replies, “Rey Skywalker”.

← Ford vs Ferrari
Spies in Disguise →