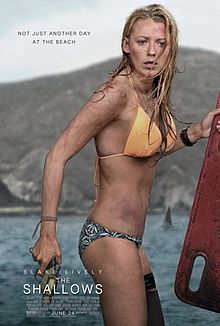 Shortly after the death of her mother, medical student Nancy Adams travels to a secluded beach in Baja California, the same beach her mother visited while she was pregnant with Nancy. Carlos, a friendly local resident, gives Nancy a ride and drops her off at the beach. Nancy joins two other locals and the three surf for several hours. Taking a break from surfing, Nancy video-chats with her sister Chloe. When she talks to her father in an emotional and strained conversation, it is revealed that her mother’s death caused Nancy to consider dropping out of medical school.

While surfing one last time for the day, Nancy notices the carcass of a large humpback whale nearby. As she rides the last wave back to the beach, a large great white shark knocks her off her surfboard and bites her leg. Nancy climbs onto the whale carcass, but the shark rams it from underneath, forcing her to swim to an isolated rock. She uses her surfboard strap to slow the bleeding from her leg. Later she uses her jewelry to put rudimentary stitches in place to hold her torn flesh together. Nancy is left alone when the unaware locals leave the beach, and she spends the night on the rock with a wounded seagull, which was also injured by the shark, and names him Steven Seagull. The next morning, a drunk local man on the beach steals Nancy’s belongings. While wading out into the shallow water to steal Nancy’s surfboard, however, he is killed by the shark. Several hours later, the two locals Nancy had surfed with the day before return. They get into the water before Nancy can warn them away, and are also killed by the shark.

One of the local surfers was wearing a GoPro camera on his helmet. When he was attacked by the shark, his helmet had come off and floated to the surface. Nancy later sees the helmet floating in the water. After some struggle, she is able to retrieve it and notices in the footage of the attack, the shark has a large hook stuck in its mouth after a possible encounter with fishermen. Nancy uses the GoPro to leave messages for her sister and father as well as information about the shark attack and her location.

With high tide approaching, Nancy realizes the rock will be submerged soon. After sending Steven Seagull toward shore on a piece of the surfboard, and timing the shark’s circles from the whale carcass to the rock, Nancy swims to a nearby buoy, narrowly avoiding the shark by swimming through a group of jellyfish, which sting both the shark and her. Nancy finds a flare gun on the buoy. She shoots one flare to draw the attention of a faraway cargo ship, but the ship has already turned away and does not see her. She then fires another flare at the shark, setting the oil from the whale carcass alight and angering it, but otherwise having no effect. The shark then ferociously attacks the buoy and rips out the chains securing it to the ocean bed. Nancy straps herself to the last remaining chain and as it is ripped from the buoy, she is pulled down to the ocean floor, pursued by the shark. At the last moment, Nancy pulls out of the dive, and the shark impales itself on some rebar from the buoy’s anchor.

Later, a boy named Miguel at the beach finds the action camera and informs his father, Carlos. Carlos finds Nancy floating close to shore and revives her. Nancy briefly sees a hallucination of her mother. As she looks around the beach, she sees that Steven Seagull has made it to the shore. One year later, a healed Nancy (now a doctor) and her sister Chloe go surfing in Galveston, Texas, as their father tells Nancy that her mother would have been proud.